Whether a lake is made naturally or manually, the bitter truth is that it will wear down after some time. Sadly, lakes and ponds erode gradually with time.

According to the Watershed Council, it’s estimated that more than one billion tons of sediments pollute the US waters every year. The case is almost same all over the world.

Once a natural process, lake erosion is now more of our own creation, as human-made landscape and construction have also contributed in its acceleration.

In the US, it mostly affects inland lakes in Michigan and the Great Lakes.

What Is Lake Erosion?

Lake erosion is a geographical destruction process caused by natural factors such as wind or water. Courtesy of climatic changes and global warming, the globes’ landscape is changing, causing the water levels to rise. 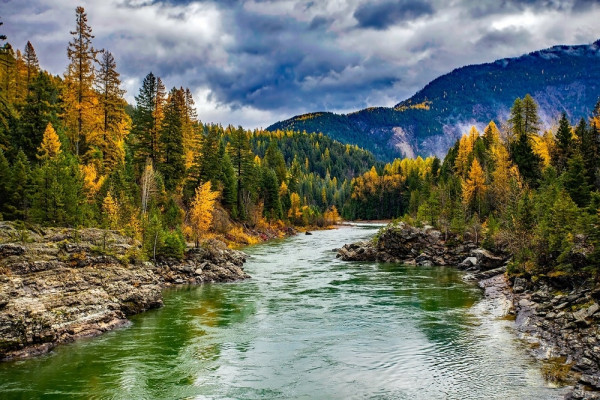 Lake erosion happens in every region where a body of water meets the land. As the water waves come to the shore, they pick up the debris along the way. The residue may comprise smaller objects like rocks or soil.

To implement lakefront property erosion prevention, it’s better to understand why it happens in the first place.

In simple words, the movement of water causes lake erosion. You can see on the shore where lake water carves its path through erosion.

Moreover, it doesn’t necessarily mean that a flowing river or crashing waves are the leading causes of erosion. Even the regular movement of water can cause erosion on the shoreline.

Do you know that erosion occurs both at the waterline and below it?

Usually, the waves cut away at the earth and leave the overhanging edges. What happens next is that the edges become unstable and, consequently, collapse. 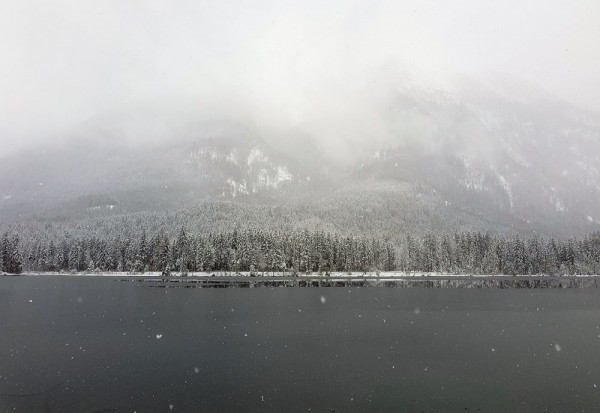 It happens due to high rainfall and inflows from run-of in surrounding catchments. That’s how the water level rises and erodes the shore soil.

Other than the natural processes, many other factors are responsible for lake erosion:

These primarily include factors such as frost action, wind erosion, soil creep, and slumping.

Although these are natural causes, we can address them with proper landscaping and construction. Meaning, we can consider groundwater movement, wind, and temperature changes before constructing our houses alongside lakes.

Besides, the lakes aren’t static. It means they continuously change according to the environment. Well, it’s a naturally occurring phenomenon responsible for natural erosion.

This accelerated erosion happens by changing the elevation of the property near the lakes. Afterward, the property structure raises above lake levels causing the shoreline to be more exposed to waves and other natural forces. 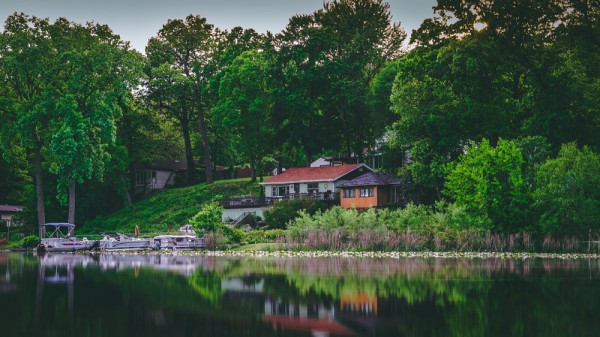 In addition to that, many people remove vegetation to increase lake visibility and access to the water. In this way, they destroy natural habitats and remove natural erosion control systems with their own hands.

The final nail in the coffin is installing impervious surfaces such as driveways or structures; thus, making the surface area completely incapable of absorbing water from precipitation.

Consequently, the precipitation starts collecting in the pool, causing erosion instead of naturally absorbing into the soil.

It’s the most influential factor, which impacts the lake erosion on a landscape. It includes both precipitation and wind.

Variation in temperature causes the lakes to freeze in winters or swimmable in summers. On the other hand, strong winds also contribute to eroding lake shores.

The shape of a surface of a particular area also determines the impact of erosion. For instance, the earthen floodplains of river valleys are more vulnerable to erosion than rocky flood channels.

Plantation slowly impacts the process of erosion. Their roots adhere to soil and rock particles, thus preventing their transport during wind events or wavy rainfall.

It’s a natural phenomenon that shapes the landscape itself. For example, tectonic uplift causes some parts of the landscape to rise more than others.

A great example is the Colorado River’s uplifting to cut deeper into the Colorado Plateau in Arizona. Consequently, in five million years, it formed the Grand Canyon, which is one mile deep and 18 miles wide in certain places.

We all know that lake shoreline property always has a higher value because of the location. However, lake erosion or recession of shore can cause a loss of thousands of dollars on a cost-per-square-foot basis.

However, it doesn’t include any potential damage or loss to the near-shore building in case of a storm or high-tide.

The disruption of the lake ecosystem also impacts the quality of water, making it cloudy. Additionally, the overgrowth of algae makes the lake unpleasant for people.

The question under discussion here is why do we need to prevent lake erosion.

It’s entirely a commonly known phenomenon that properties near lakes are in high demand. Subsequently, the construction around the lake removes all the natural landscape, rocks, vegetation, and trees. 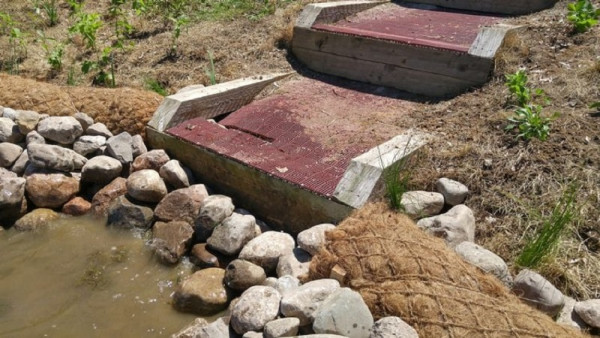 That’s why human intervention is the leading cause of increased lake erosion. What happens is that lake erosion wipes away the usable land, thus making the entire area unsafe and unstable.

Besides, many existing buildings and properties become a high-risk location to suffer from continued lake erosion.

As a result, you won’t be buying a lakeside property just to find out that it will be smaller after ten years or so.

To address the lake erosion, many laws and regulations govern the future construction and keep the current residents safe.

How to Stop Lakefront Erosion

Preventing lakefront erosion requires us to take specific measures. However, keep in mind that all these lake erosion restoration measures aren’t suitable for all the regions. Some influencing factors include typical wave action, lake slopping, and the shoreline composition.

For instance, lakefront erosion control measures are different for a lake in Chicago than those in Michigan.

Plantation of Native Plants and Grasses

The first and foremost thing to do by the landowners is to plant native vegetation and plants. Indeed, vegetation is one of the most natural ways to prevent lake erosion.

It’s because native vegetation will hold the soil in place with its roots. Subsequently, they will divert rainwater and prevent lake erosion.

Many vegetation can be invasive or not perfect for the environment. It’s better to research the vegetation to strengthen the soil in the particular climate of the region.

For instance, marches, mangroves, and other wetland plants are found more along the lakes. Their roots act as baffles and provide the required stability to the land.

When the waves approach the shoreline, the vegetation breaks up the wave energy. That’s why their energy is quite dissipated after reaching the shore.

Don’t worry; you can always re-plant native vegetation if the plantation has been removed from the shoreline. It’s a practical yet futuristic way to limit lake erosion shortly. 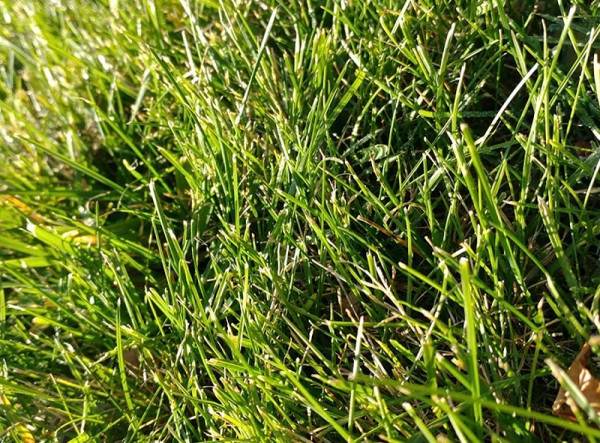 By the way, you can buy Cabin Grass Seed Mix consisting of a blend of three low growing, deep-rooted kinds of grass – Sodar Streambank Wheatgrass, SheepFescue, and Roadcrest Crested Wheatgrass. The best thing about these grasses is that they are quite hard and can survive three consecutive years of drought.

Not only that, they take 60 to 90 days to fully mature and stay naturally green from fall to spring.

Preserve the Shoreline With Stones

Yes, stones play a vital role in creating a rip trap around the lakes’ shores. All you need to do is place larger stones, approximately two feet in diameter, side by side. In this way, these stones cover the entire shoreline.

Moreover, these stones should be more than one foot higher than the maximum watermark and one foot below the regular water line. That’s how the rocks above the most elevated water line protect the shores during sirens or unpleasant high tides.

On the other hand, the rocks below the regular water line protect the shore during the dry times when the water level is low.

The stones dissipate the water waves’ energy before they reach the loose material such as sand or soil.

Summing up, stones or rock revetment is a durable and long-term solution that requires little to no maintenance. Since the rocks absorb the energy, they don’t redirect to cause erosion in some other location.

Other than the stones, you can also prevent lake erosion with the help of seawalls. A seawall is a large concrete structure built on waters to withstand the waves’ force. In this way, it stops the waves from reaching the shore. 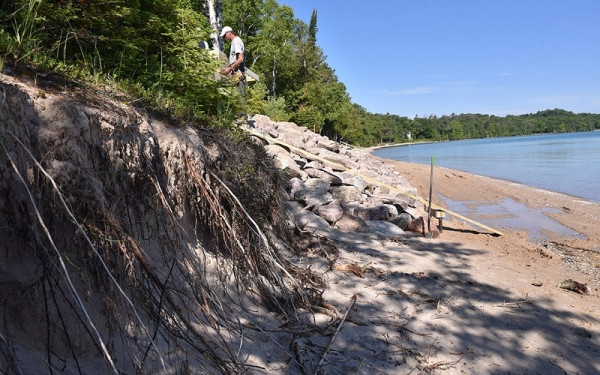 On the one hand, a seawall protects the shores, but on the other hand, it redirects the wave energy. Consequently, it may cause more significant erosion in the proximity of the protected area.

A seawall merely reflects the wave action without causing any loss of energy. It eventually results in a standing wave. On the downside, a clapotic action can cause more damage to the seawall than any good.

It’s a known method that has been in use, especially in a flood management situation. Sandbags are quite useful in absorbing the energy to prevent lake erosion.

As a result, they are proven more effective than the seawall; however, they perform best in short-lived and temporary events.

Besides, sandbags can quickly degrade from the elements; that’s why they aren’t a long-term solution.

Keep the Pasture Animals Away

It’s better to fend off the lack so that cattle, horses, or deer can’t reach the lake quickly. The livestock is responsible for damaging the soil, eating the vegetation, and trampling the shoreline.

You can implement a horizontal to vertical ratio of three to one for pond embankments. Or you can simply use flatter side slopes, especially after new construction.

To facilitate the grass plantation process, you can opt for a Dewitt Curlex SignelLayer Erosion Control Blanket. You can easily roll out on stream banks and waterways to hold the seeds and fertilize them in one place.

These blankets are beneficial if you want to increase plantation on the lake shores. The water waves may wash away the planted seeds, so you may need to roll out an erosion control blanket to facilitate re-plantation. 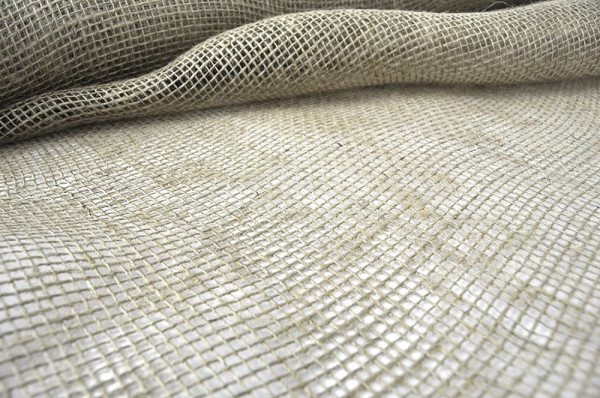 Moreover, you can use Easy Gardener Natural Burlap Weed Barrier Fabric to help the seeds to germinate by holding the moisture. Additionally, it also prevents wash-away.

Another preventive measure to control the lack of erosion is to use Mulch Lock 16000 to hold the sand and dirt in place for up to 12 months. It’s entirely non-toxic, so that you can spray it near trees, slops, edges, and pathways.

In addition to that, the Silt Sock for Sediment and Erosion Control by New Pig reduces the water flow rate. It’s basically organic compost ideal for construction sites near the lakes.

Lake erosion modifies the entire ecosystem of lakes by removing the soil from the shore, thus making the adjoining area unstable. Moreover, it removes the necessary plants required by fish as food and causes the water to lose clarity.

It’s our duty as responsible citizens to protect our planet earth to prevent erosion. We can adopt certain measures such as planting, adding mulch or rocks, and building retaining walls.