Red, blue, and black devilfish species are worth noting. These unique fish can live in an aquarium, and there are lots of interesting devilfish facts to learn.

In Australia, the blue devil fish resides in secret. Not much is known about it. However, it’s distinguishable through its colorful exterior. Other common names for the fish include Eastern blue devil or Bleeeker’s blue devilfish.

On the other side of the globe, you’ll come across the red devil fish. It’s a larger species from the cichlid family originating from Nicaragua.

In terms of mysterious sea creatures, take note of the black devilfish. It resides in warmer waters but is rarely seen. As a deepsea dweller, it’s not possible to view it on an occasional dive. 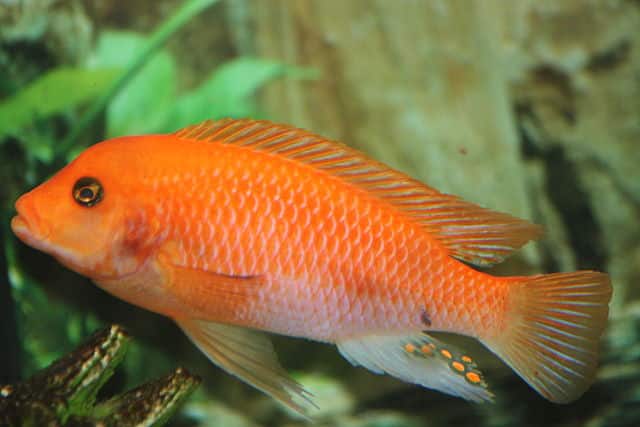 A common trait among all red devilfish from the San Juan River is coloring. Bright red is the primary color of all species, including adults. At times, however, the bright red can resemble brownish-red, with others having a whitish appearance.

But, all the fins have some highlights of white. It’s also not uncommon for adults to have a white underbelly. Check out pictures of red devilfish that show the details.

When you want to keep the red devilfish in an aquarium, consider its size. An adult species can grow quite large.

Therefore, a tank more prominent than 50 gallons is a more suitable home. That provides the fish with ample space to swim.

Additionally, line the floor of the tank with sand and stones. The red devil fish loves to dig, so make sure the rocks aren’t stacked. Stacked stones can fall and harm the fish in the tank.

Many people wonder why the fish is known as the red devil. Well, among the top red devilfish facts is that it’s quite an aggressive animal. Any intruder gets to see this fact first hand when they come face to face.

Frankly, the red devilfish has teeth that mean business. The teeth are more prominent than that of most fish species and are supported by an even stronger jawline.

That’s why the species are formidable predators out there. Therefore, it might not be a good idea to keep them in one tank with other fish.

Another important piece of information worth noting about the red devilfish is their habitat. Even though it’s in numerous aquariums across the world, it originates from Central America. Lake Nicaragua and Lake Managua are home to this majestic creature.

It’s a freshwater fish that prefers the open waters but swims in the San Juan River. A fully grown red devilfish can reach 15cm in length.

Since this is a mighty aggressive fish species, it’s better not to keep it with potential prey. So which are the best red devilfish tank mates?

Among the other red devilfish facts, is that they can only live in harmony with fellow cichlids fish species. However, it’s still not the best idea to keep many in one tank. Lack of ample swimming space can result in problems.

The red devilfish is originally from Central America. But, some schools live in the waters around Indonesia. These were introduced to the wild a while back. And now, many people consider them an invasive species.

Their aggressive nature makes it easier to dominate any waters they find themselves in easily.

What do red devil fish eat?

The red devilfish is an omnivorous animal that can eat anything they come by in the wild waters. As a predator, they crave a diet with lots of protein.

That’s why most go after worms, small fish, and aquatic plants. Their rugged teeth make it possible to go after larger prey.

Another of the juicy red devilfish facts is that it lives for more than a decade. Twelve years is the maximum lifespan of an adult. Though they are predatory fish, they have few predators hence can live longer.

Also, one factor contributing to their lifespan is better living conditions. Since the species isn’t under threat, it’s easier for it to flourish in the wild.

Female and male devil fish look alike. So how can you tell them apart? Well, you have to note the size of a fully grown fish. In reality, adult red devilfish are larger than females.

Additionally, there are two extra features that males have that aren’t present in females. One is a hump on the neck of male fish. It’s permanent and never comes off.

Two is the pointed genitalia only on males for reproductive purposes.

Many people keep the red devilfish in an aquarium at home or in other places. These species can be great ornamental fish but aren’t a delicacy. Real red devilfish aren’t fit for human consumption. 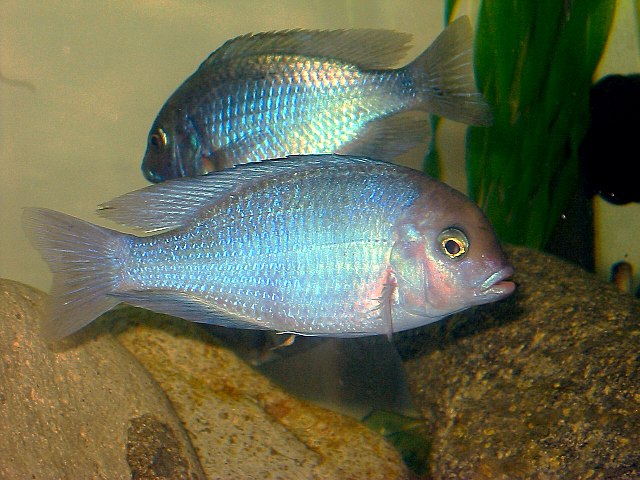 Did you know the Blue Devilfish feeds on crustaceans like crabs and mollusks? Not to mention it also goes after small fish that make the best potential prey.

It’s an essential piece of Devilfish information to have if you want to keep some in a fish tank.

The natural habitat of the blue devilfish is saltwater. You’ll find the species in Australia or on the Indo-Pacific Ocean. The best area for them must have reeds or a lagoon with lots of hiding places.

The blue devilfish is a small creature that loves living in salty conditions. However, don’t let the small stature hoodwink you into thinking these are nice fish.

Frankly, the blue devilfish are pretty aggressive. Therefore, it’s not the perfect tank mate for other fish species. If you want to have a community tank, then keep looking for others.

But, if you only want to keep the blue devilfish, you can bring it home. Their aggressive behavior confirms these are real devilfish.

One of the most astonishing blue devilfish facts is its color-changing tactics. Despite being blue, it can turn yellow or orange.

However, when it senses a predator near, it ducks into a hole and turns completely black. The black color acts as camouflage, keeping it safe. Once the predator passes, it turns back to a radiant blue color and keeps swimming.

You can get away with keeping the fish in a smaller tank. The tank can measure 30 gallons but make sure the fish species is alone.

As blue devilfish mature, they become aggressive. Therefore you can start it in a community tank but move them as they grow older.

One of the most noticeable blue devilfish facts is its anti-social skills. In the wild, it prefers to live alone in dark places with lots of areas to hide. The only time it mingles with others is during spawning.

Mostly, the breeding season starts in March and October of each year. Females lay eggs in caves or dark crevices.

These eggs remain attached to the walls until hatching time. The hatchlings leave the caves and dwell among the reef.

Hatchlings of the blue devilfish are only 4mm long. So, it’s almost impossible to see them.

The tiny larvae swim to areas with lots of reefs to hide. Therefore, sightings are pretty rare, and some even remain deep inside the caves until they grow big enough to wander off.

Some crucial devil fish information is the fact that blue devilfish are pretty rare. The species isn’t endangered, but it’s protected.

Protection is necessary since the species is naturally quite rare. Such rareness is why many people like having some in aquariums.

However, it’s illegal to fish or serve the fish since it’s under government protection. Moreover, anyone who wants to keep the species in a fish tank must get special permits.

Blue devilfish can live for six years. The duration is longer when you keep them under the right circumstances in a fish tank. But, in the wild, the lifespan ranges from 3 to 6 years. 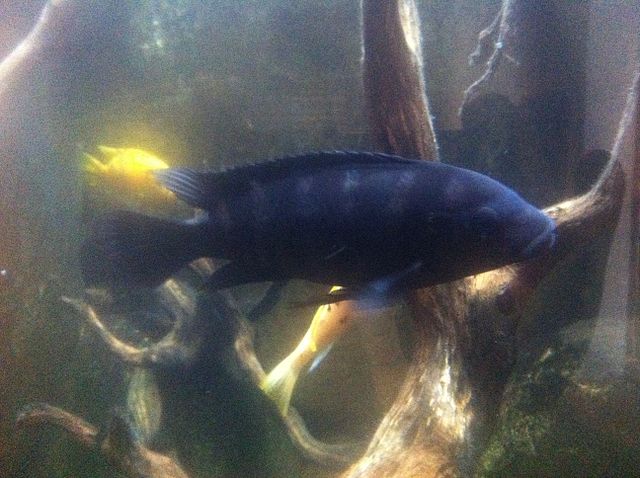 Topping the list of black devilfish facts is that these are deep-sea-dwelling animals that never come to the surface. They prefer the darker parts of the oceans.

Most live in warm waters in tropical areas, making it easy to live in the dark for most of their life.

Most of the 5 black devilfish species prefer tropical waters. Therefore, you can find some in the Atlantic, Pacific, and Indian Oceans. Here waters are warm and have ample food even at the bottom of the ocean.

However, one species lives in a colder climate. Observations have located some in the Ross Sea, which is in Antarctica.

The appearance is among the most interesting black devilfish fish facts. The first thing you notice about the Black devilfish is its physical appearance. It doesn’t have any scales on its jelly-like body.

Additionally, its head is quite large and has numerous sharp and menacing teeth on its mouth. However, only female black devilfish have such teeth.

Males never feed and are only sperm carriers for their female counterparts. Only females eat.

However, despite not feeding, males live freely but can have parasitic tendencies. Little is known about their reproductive behavior.

See Related: Types of Bears Around the World

Female black devilfish have a way to lure prey that’s quite irresistible. They have some poles at the top of their heads that glow, attracting fish and crustaceans. Once the prey is near, the black devilfish swallow it whole.

Currently, there’s little information about the predators of black devilfish.

No. Black devilfish pose no threat to humans since these aren’t poisonous creatures. In some parts of Korea, the fish is even a delicacy.

However, it’s not safe for humans to dive deep in search of the fish without special equipment. Such pressurized conditions are deadly to human beings.

While black devilfish aren’t under protection, they are pretty rare. The species aren’t endangered, but it’s not easy to catch them on a random fishing trip.