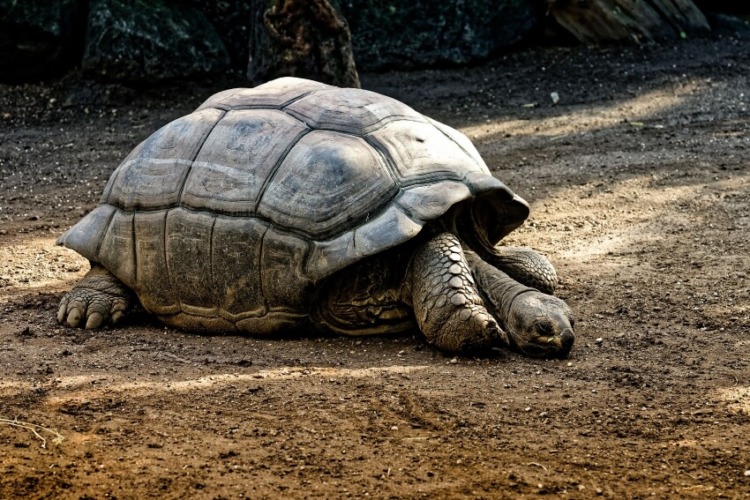 The Galapagos giant tortoise is a huge, slow-moving, brown-shelled tortoise and type of turtle that measures an average of 1.2 meters long and weighs 250 kilograms – though an occasional huge specimen can reach as much as 400 kilograms in weight.

Long-necked and small-headed, these tortoises move slowly enough so that lichen grows on the shells of some individuals as it might on a small boulder.

The tortoises likely were able to cross the ocean to these remote islands because of their size and bulk, and the survival advantages that gave them while floating over the waves, rather than becoming huge once they had colonized the islands.

The largest subspecies are found on larger, moister islands, while the dry, small islands tend to have smaller tortoise subspecies.

The Galapagos giant tortoise is a gentle, mild-mannered beast that lives a calm, placid life. A typical tortoise is active for 7 to 9 hours per day, spending the rest of the time sleeping or napping.

These tortoises also enjoy basking in the sun, warming up their heavy bodies prior to foraging. Grass, flowers, cactus flesh, and cactus fruits all form part of the animals’ diet. Several tortoises often forage together in a loose group.

Galapagos giant tortoises store enough water and nutrients in their bodies to survive for up to a year without eating or drinking – another adaptation that helped their ancestors reach the islands long ago.

When food is available, however, they may eat as much as 36 kilograms daily.

The tortoise enjoys a mildly symbiotic relationship with Galapagos finches on some islands, where these birds clean parasites off the tortoises’ skin and get a tasty snack in exchange.

Though generally quiet and docile, the Galapagos giant tortoise becomes somewhat competitive in the breeding season. Males strive against each other not in combat, but by attempting to stand taller and look larger.

The female lays up to sixteen eggs in a nest hidden in sandy ground, abandoning them after laying them. Those tortoises who survive the challenges of their early years can look forward to a lifespan of up to a century and a half, and perhaps more in rare cases.

The Galapagos giant tortoise is found only on six of the Galapagos Islands, an island chain 1,000 kilometres off the Ecuadorian coast. These islands include Isabela Island, Pinzon Island, Espanola Island, San Cristobal Island, Santa Cruz Island, and Santiago Island.

The subspecies from other islands are believed to be extinct.

The Galapagos giant tortoise was hunted mercilessly for meat in the past by the crews of passing ships, especially pirates in the 17th century and whaling ships in the 19th.

Probably around 200,000 tortoises were killed and eaten at this time. By the 1970s, only 3,000 tortoises remained, though captive breeding and reintroduction have helped to bolster their numbers greatly.

Poaching still occurs, though at a far lower level than in the past when there were no protections at all for the tortoises.

The main threat today comes from domestic animals introduced to the islands and now existing as feral populations, or introduced vermin. Rats, cats, dogs, and pigs all prey on young tortoises, though the adults are too large and too well armored to fall victim to them.

Feral goats devour the food that the tortoises need to survive.

A highly successful program at the Charles Darwin Research Centre involves raising young tortoises until they are five years old and better able to survive, then releasing them – a program which has single-handedly brought the species back from the brink.

Feral animals of all kinds have been culled – and in some cases, eradicated – on many of the islands, an ongoing task that helps to create better conditions for tortoise survival.

Do you know of or are you a part of an organization that work to conserve the Galapagos Giant Tortoise, then please contact us to have it featured on Our Endangered World.