Around the world, certain animals are on the endangered species list. Some of these amazing creatures are the Mexican bobcats. Read on to learn more.

Did you know that there is a certain species of bobcats native to Mexico? The Mexican bobcats inhabit the Nayarit and Sinaloa parts of Mexico. It shares certain similarities to lynx, which is why it’s easy to confuse the two creatures.

Since 1976, the Mexican bobcats have been featured on the endangered species list due to their dwindling population. It’s a predator that prefers to live a solitary life except during mating season.

Before delving deeper into why it’s endangered, it’s crucial to start with basic facts about the Mexican bobcats.

What is the Mexican Bobcat? 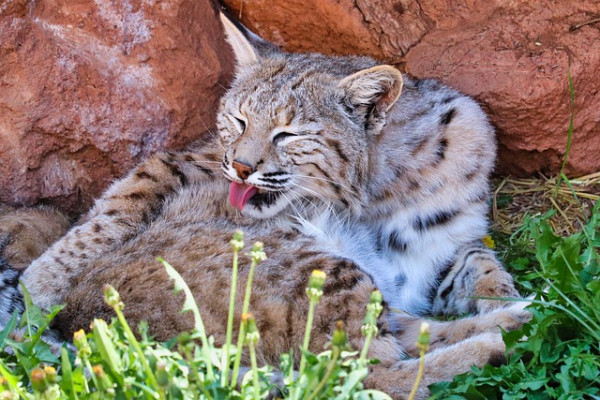 The Mexican bobcats are a species of cats known to inhabit parts of central Mexico. The cat has distinctive features that separate it from the rest of the species.

For starters, it’s smaller than the other bobcat species living in North America. However, it’s still a large animal that’s bigger than a domesticated cat.

It shares some physical traits with the lynx. The only difference between them is the tail. Mexican bobcats have a darker tail.

Usually, it’s quite common for grown bobcats to achieve 30 pounds in weight for males. Females are slightly lighter but still bigger than ordinary cats.

In terms of coat coloring, most have a gray covering that, at times, can be reddish-brown. Additionally, there are some spots on the coat. These spots are the main difference between the Mexican bobcats and others living in North America.

Moreover, another feature that distinguishes them is some stripes of black fur on the front legs. Also, it has a darker tail and ear tips. They look almost black.

What is the Lifespan of Mexican Bobcats?

Living in the wild is different from being in captivity. Animals brought up in captivity tend to live longer. Not only do they receive a better diet, but they also get treatment for diseases.

With that being said, Mexican bobcats live up to 12 years in the wild. However, they can live more than two decades in captivity.

Why is the Mexican Bobcat Special?

Like all other animals in the wild, the Mexican bobcats play a crucial role in the ecosystem. These are predatory animals that feed on different smaller creatures. Doing so keeps populations in check, such that certain animals can’t take over the entire ecosystem.

Not to mention these are beautiful creatures. They are a sight to behold as they creep into the rocky areas in search of food.

They add to the biodiversity of the region and are known to be tolerant to humans. That’s even though sport hunting continues to hurt their population.

Certain parts of Mexico have a higher population of Mexican bobcats than others. But, these animals live in the entire country. It enjoys inhabiting a variety of environments hence the population distribution.

For instance, you can find the cat in areas with dense forests, scrublands, in the desert, and swampy areas. All these are full of preferable prey. Every part is a territory since the cats don’t migrate.

Commonly, territories stretch over several miles for male Mexican bobcats. However, they overlap with female territories.

Living in a diverse habitat means the Mexican bobcats eat a variety of food. Being a carnivore, it explores a wide area in search of its next kill. Food choice ranges from birds, rodents, rabbits, snakes, and lizards.

However, it’s crucial to note that the bobcat has certain predators. It can fall prey to wolves, humans, foxes, coyotes, and mountain lions—such predation is a huge contributor to the dwindling numbers.

How many Mexican bobcats are left in the world?

Though the exact population of the Mexican bobcat is unknown, conservation efforts are bearing fruit. There are currently over 1 million bobcats living in different parts of North America. That covers Mexico, the US, and Canada. 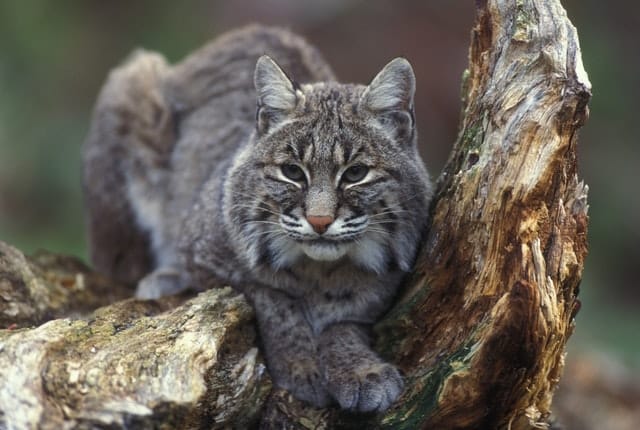 Here are some interesting facts worth noting about the Mexican bobcats.

Mexican bobcats are similar to the lynx, as mentioned earlier. It’s easy to confuse the two creatures from a distance. But up close, you notice some distinctive differences.

First, the bobcat is smaller than the lynx. Second, it has black markings on its tail, which differs from its cousin.

Like many other animals, the Mexican bobcats can live longer in captivity. Not only are the conditions better, but they enjoy good food and treatment. That’s why the cat can live up to 2 decades in captivity.

But, the difference is evident in the wild. Due to many risks and dangers, the Mexican bobcats tend to live up to 12 years only in the wild.

Another fact worth noting is that Mexican bobcats are impressive hunters. Once they have prey in the lock, they can achieve speeds of 30 miles an hour.

Not to mention, it’s quite stealthy and knows how to creep up on prey undetected. Such prowess makes it easier to hunt even in tougher terrain.

The reason why the Mexican bobcats can move fast is that they have a smaller body. The largest males are about 33 pounds in weight. Being light helps them maintain stealth and speed while hunting.

As a member of the bobcat family in North America, the Mexican bobcat is a carnivore. That means its diet is solely made up of meat. The cat is a skilled hunter that can eat numerous smaller creatures.

Sharp vision and hearing make the Mexican bobcats avid hunters. They can see or hear prey from miles away. That makes it easy to approach it stealthily and make the kill.

When you compare the Mexican bobcats with others living in North America, you can note it’s the smallest. Others living in the US and Canada tend to be bigger. However, it’s still twice as big as the domestic cat.

There are few environments that Mexican bobcats can’t live in. It explains why you can find them all over Mexico. Though it’s worth noting, certain parts have a higher population.

While some animals make one den a permanent home, Mexican bobcats have several. Often, males cover many miles in terms of their territories. Therefore, they have numerous dens inside the territory where they spend time now and then.

Commonly, dens are caves in rocky areas, lodges, and hollow trees, among others. Most lodges are abandoned by other animals making them perfect dens for the Mexican bobcats. They spray urine at the entrance to let any intruders know the den has an owner.

The territory of a male cat can cover several miles. It’s not uncommon for the animal to stalk the whole area often. Usually, the motivation behind it is to remove encroachers and also hunt. Its small frame makes it easy to walk far and scale higher areas. 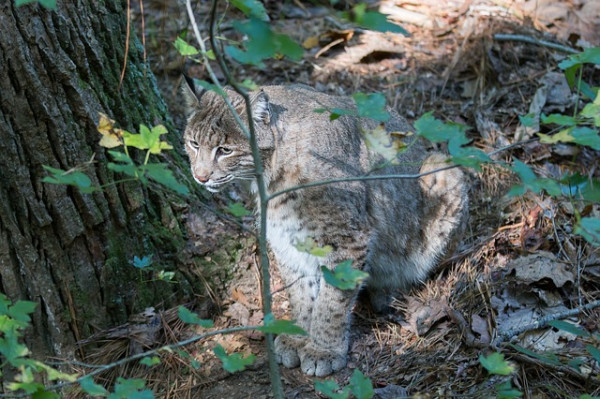 It’s not possible to see two Mexican bobcats living together. The only time they interact is during mating. Also, you can see this when a mother is raising her young.

But, after the cubs grow up, they go their separate ways. Cubs remain with their mums for only one year.

Bobcats come together during mating season. It begins in late winter. However, it can also happen at any time of the year.

A male can service several females that live within its territory. The territory covers around 30 miles.

After mating, females go through gestation. They give birth to up to 6 kittens which they raise until they reach 8 to 12 months old.

After that, the female leaves them. Females take time to find the perfect den before settling in to give birth.

Once kittens are born, they rely on their mother’s milk for sustenance. But, that only lasts for two months. Afterwards, they start eating meat, and mum teaches them how to hunt.

At the age of 8 months and above, the mum chases them away from her territory.

Bobcats can be quite tolerant to human beings living in their territories. However, there’s always a chance of human-animal conflict. Some tend to wander too close to neighborhoods causing panic, and people prefer to shoot the animal rather than risk harm.

Being a carnivore doesn’t exempt the Mexican bobcats from being prey. Larger carnivores like wolves, snakes, or foxes, can hunt the cats. Some kill them for territory while others for food.

Why is the Mexican Bobcat Endangered?

In 1976, the Mexican bobcat became part of the long list of endangered species globally. Though conservation efforts are ongoing, the population remains low to date.

First, the biggest reason for the low population is the loss of habitat. Many Mexican bobcats find themselves without a home due to the encroaching human population. Since each cat needs a wider territory, this has led to human-wildlife conflicts.

Second, sport hunting is rife in Mexico. Many game hunters have Mexican bobcats on their target lists. Such activities have led to dwindling numbers in the Mexican wild.

The third is the fact that Mexican bobcats have a soft coat of fur that many people like. That’s why they’re hunted often. People want fur for numerous reasons, including decoration. It’s not uncommon to see a bobcat pelt in certain parts of Mexico.

Fourth is the issue of disease. The Mexican bobcats are less likely to get treatment when they fall ill or are hurt in the wild. The ones in captivity live longer due to such benefits. When the animal falls ill, it’s easy to die without anyone noticing.

However, conservation efforts are bearing fruits, and numbers are slowly increasing in the wild. The growing numbers bring hope to a beautiful species that are beneficial to its ecosystem. Since some Mexican bobcats have trackers, it’s easier for conservationists to note their movement.

That way, they can see if they got too close to humans. And also, note when the animal is ill and in need of medical assistance.