Description of the Whale Shark

Whale sharks are deep blue with pale patterns of speckles, with pale underparts. Whale sharks have huge, wide mouths, which is one of their most notable features.

These giant fish swim slowly through the warm tropical and subtropical seas. Despite their name and formidable size, Whale sharks are extremely gentle creatures and eat only tiny organisms collected via filter feeding.

They can filter feed by opening their mouths while swimming or by actively gulping and expelling water. For this reason, whale sharks can target swarms of small animals or clouds of fish eggs and sperm in the spawning grounds of various species.

Humans are safe from these creatures as whale sharks are generally neutral or even slightly friendly to human beings, allowing swimmers to “ride” them for a distance. Young whale sharks sometimes play with human divers also.

Though a human could theoretically be accidentally sucked into a whale shark’s mouth if they were swimming close to its lips when it decided to gulp krill or fish, this is never known to have occurred.

Whale shark reproduction is largely a mystery, though one female is known to have contained over 300 small “pups” who are likely born in sequence rather than in one huge swarm.

Whale sharks reach adulthood at around 30 years of age and may live for up to a century.

Check out these other types of sharks around the world. 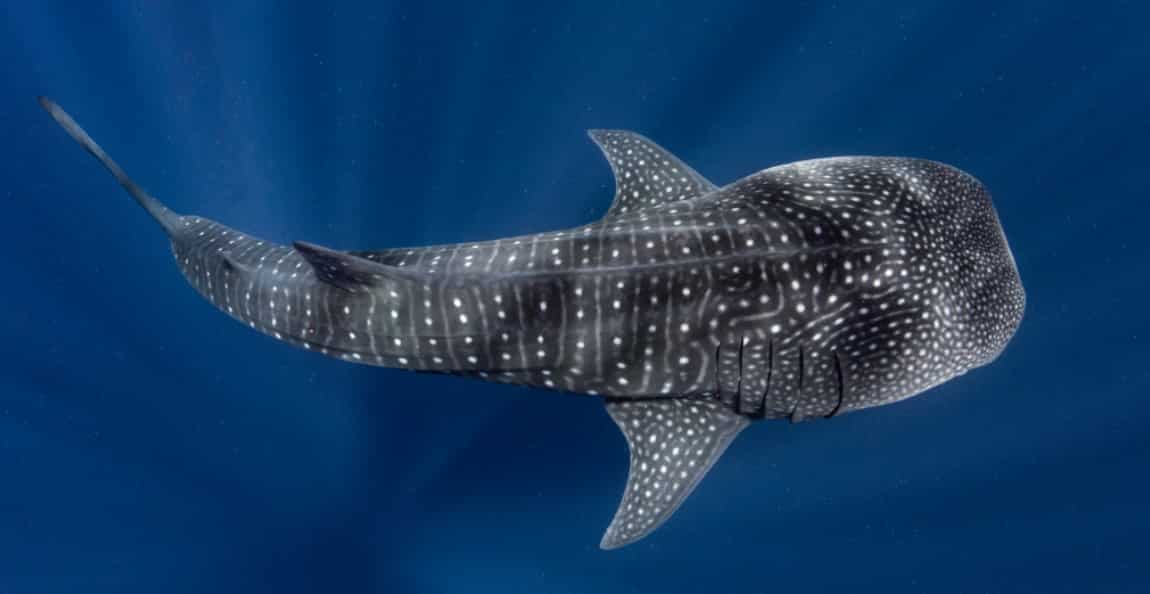 Whale sharks are found in tropical and warm temperate oceans, including the South Atlantic, South Pacific, and the Indian Ocean.

Though they swim in deep waters, large groups of whale sharks gather periodically in coastal waters to feed on seasonal food sources. Up to 400 may gather where tunny spawn is occurring, for example.

Whale sharks are still commercially hunted in some areas of the world, and since their population is unknown, this hunting could potentially represent a serious threat.

Oil slicks from tanker spills and oil rig disasters may threaten whale sharks, though dead whale sharks have not yet been observed near these disaster areas.

Global warming and climate change is an issue. As oceans warm up, it causes the oxygen levels in the water to drop.

This can negatively impact marine life and can also change certain behavioral patterns as well. Those fish species that depend on deep ocean dives for their food end up staying closer to the surface. Whale sharks are one species known for their deep dives.

Fish spawning patterns, krill levels, and plankton formations are all food sources for whale sharks as well and are also negatively impacted by these temperature changes. All of these problems affect the migration patterns of the whale shark and can impact its population.

Another issue whale sharks face is evidence of overfishing. The meat, oil, and fins of the whale shark were sought after in Asia. However, with some education, pressure for global conservation, and more economic realignment efforts, the decrease for whale sharks has decreased slightly but is still prevalent in some Taiwanese markets.

Commercial overfishing is another problem impacting whale sharks. Overfishing can upset the marine ecosystem and cause a coral reef decline.

Whale sharks and other species depend on these coral reefs. So, as the coral reef begins to deteriorate, so do the populations of fish species that rely on them.

Whale sharks are important for the ecotourism industry. However, because they spend a good part of their day drifting beneath the water’s surface where they can feed on plankton and shrimp, they become vulnerable to boat injuries.

Cuts, scrapes, and gashes are common for whale sharks, and these injuries can turn out to be severe and can reduce a whale shark’s chances of survival and can affect its breeding ability.

The Conservation of Whale Sharks

Whale sharks are important to our ecosystem. If the whale shark were to go extinct, there could be an increase in the number of plankton. So, to avoid this, we have to follow through with conservation efforts.

Bans on fishing for whale sharks and selling or trafficking in their meat have been in place since 1998 in Taiwan and slightly later in other nations in the region.

A Whale Shark Photo-Identification Library exists as an effort to catalog and estimate the world population of these huge, fascinating fish based on the unique skin patterns of specific individuals.

Such a catalog would allow better conservation efforts since it would make the population changes more measurable.

We are now also collecting data on whale sharks faster than ever before. This new surge in research has helped secure legal protection for whale sharks in several locations worldwide, including Australia, the Maldives, the Philippines, India, Mexico, Honduras, and the United States, among others.

To help estimate the whale shark population and study migration patterns, photo identification is used. Underwater photographs go into a database where they are compared. The whale sharks are identified using their spot patterns; each is individually unique.

Many whale sharks are found along the coast of India and other countries worldwide. Using genetic analysis can help explain the genetic diversity of the whale sharks while also helping to establish a relationship between their different populations and help uncover more information related to their migratory patterns.

Another significant move made in whale conservation efforts is satellite tagging. Tagging allows scientists to follow the migratory patterns of the whale shark, see which habitats they prefer, and learn more about their behavior.

The World Wildlife Organization has placed satellite tags on over 29 whale sharks. These tagged whale sharks tend to stay within 125 miles from the shore and spend their time at around 150 feet below the water, only occasionally rising to the surface to feed.

This shows us that whale sharks are mobile and can be considered transient feeders.

Organizations for the Conservation of Whale Sharks

Here is just a small sampling of the different organizations working toward the conservation of whale sharks.

Oceana is the largest international organization focused only on ocean conservation, protecting marine ecosystems and endangered species such as the Whale Shark.

Wildlife Conservation Society was formed in 1895 with the aim of protecting 25 percent of the world’s biodiversity by promoting the importance of protecting wildlife and their habitats. WCS is an environmental leader and has five zoos in New York.

The Project AWARE Foundation is based out of the US, UK, and Australia. They work with over 182 countries in an attempt to protect underwater environments. They use mobile scuba divers to help stem threats associated with shark conservation and marine litter.

Shark Angels is still a young organization but is already making progress when it comes to shark conservation. They use modern tools of technology, education, media, and local grassroots campaigns to actively save the sharks. One of their more successful programs is the Fin Free Program with their tagline being, “Say No to Shark Fin Soup.”

They are working on stopping the trade of shark fins or shark finning.

What is the Prognosis for Whale Sharks?

Ecotourism can ultimately prove to be one of the greatest whale shark conservation efforts. Whale sharks are still globally endangered, so any whale shark tourism needs to stay focused on the species’ needs while avoiding mass tourism in whale shark destinations.

Whale sharks are still classified as endangered, which means they are still at risk of extinction in the wild. However, we can help reduce the number of whale sharks killed each year by following the best commercial fishing operations and focusing on research and education of the shark species.

How Important is Ecotourism to the Survival of Whale Sharks?

Ecotourism is important to the survival of whale sharks because it is yet another way we can study them and better understand whale shark movement, behavior, and migratory patterns. There are also economic benefits that can be had with shark diving.

This ultimately makes a more than compelling argument for conservation strategies for this endangered animal pertaining to the whale shark tourism industry.

What Protections for Whale Sharks Are Making an Impact?

In US waters, it is illegal to catch whale sharks. Other countries also have certain protections in place for the species, including Indonesia and various marine sanctuaries.

We can also help reduce the number of sharks killed each year by only choosing sustainably caught products and reducing our seafood consumption. Through scientific research, scientists are studying whale sharks and their habits to gather information.

A marine scientist uses satellite tags, sonar devices, and digital cameras in these conservation efforts. With this information, marine scientist can develop further protection to put into place for this endangered species.

Other protections have been put into place in which commercial fishing is banned in certain waters to create and maintain more marine sanctuaries.

Thousands of miles have been protected around the islands of Palau and the Maldives, for example.

Other protections in place include:

Malaysia: The Convention of International Trade in Endangered Species of Wild Fauna and Flora (CITES) has banned reading about endangered plants and animals, including the whale shark. Trading is also banned, except in the rare case of continued scientific research. Other protections include the Fisheries Act of 1985 and the Fisheries (Control of Endangered Species) Regulation of 1999.

The Philippines: Under CITES and the Bureau of Fisheries and Aquatic Resources FAO 193, it is considered unlawful to take or catch a whale shark in Philippine waters.

You cannot sell, purchase, possess, transport, or export whale sharks when dead or alive, and it is also unlawful to wound or kill a whale shark in any way.

Respecting our oceans is the first step toward saving whale sharks and other marine species that may be endangered or threatened.

To do this, we need to educate ourselves about the important role they play in our ecosystem and then find ways to reduce the amount of energy we use to help slow down the rate of global warming, which is shown to have a significant impact on our oceans and the marine life therein.