That sip of cool fresh water on a sunny day or after a vigorous workout always feels like heaven. So relaxing and refreshing. But, have you ever sat back and thought what it takes to enjoy that glass of water, or that such luxury can’t be afforded somewhere else?

Well, water is life! Also finite! And if so, water pollution threatens our mere existence – as, without clean water, all sorts of infections and diseases will engulf the entire planet.

Taking care of our natural resources is vital to our lives, and that includes water resources. Studies show that contaminated water claims more lives annually than all forms of violence and war combined. So, if you thought terrorism was dangerous, think again – unsafe water is even worse.

What is Water Pollution?

This is simply the contamination of the various water bodies in our ecosystem, mainly through human activities. The main water bodies under the threat of contamination include oceans, lakes, rivers, seas, and underground aquifers.

Water pollution occurs when contaminants get into these water bodies, polluting the natural ecosystems. This results in a contaminated environment where plants and other organisms find it hard to survive or end up dying altogether.

Known as the universal solvent, water is extremely prone to pollution. This is because it can dissolve a wide range of substances, most of which will make it unsafe to drink or support life. That’s why we should be very careful about what goes into our water sources.

If nothing serious is done about this, access to clean drinkable water might become a nightmare, some few years to come. This is especially because the demand for consumable water is rising with each passing day.

Currently, over 60% of the freshwater consumed in America comes from surface water (freshwater) sources. This shows how the continued contamination of these water bodies threatens the availability of drinkable water, not only to the Americans but also to the world at large.

When looking at the types of water pollution, this one tops the list as it affects our major clean water sources. Recent studies by the US EPA (U.S. Environmental Protection Agency) show that almost half of our rivers, and a third of our lakes water, is unfit for drinking, fishing, or swimming, due to contamination.

It is also evident that nutrient pollution is the main culprit of all this, with industrial and municipal wastewater coming in second. And one thing is also clear! What we do as humans, is what threatens our future. It is essential to know proper waste management and know and consider the appropriate way or types of water disposal.

If we don’t find ways to rectify our current actions and conserve our water resources, it will cost us dearly in the future. Remember, surface water pollution not only makes safe drinking water scarce, but it also affects our health, as well as the aquatic ecosystems and their surroundings.

Besides the water we see on the earth’s surface, the earth also has large pools of water stored in spaces beneath its surface. This water accumulates when the rainwater seeps into the earth’s crust, settling in cracks, fissures, and aquifers.

While this water is not visible to us, it is an important resource in our everyday lives. For instance, around 40% of the American population entirely depends on this underground water for drinking.

Since most groundwater is stagnant, its contamination will render it unsafe for long periods of time – even up to thousands of years. This is because it’s next to impossible to remove the contaminants from such water sources.

In addition, the contamination of groundwater can seep further to underground streams and into the oceans and lakes.  All these will lead to a reduction in the availability of fresh drinking water, and sometimes, the destruction of marine ecosystems. 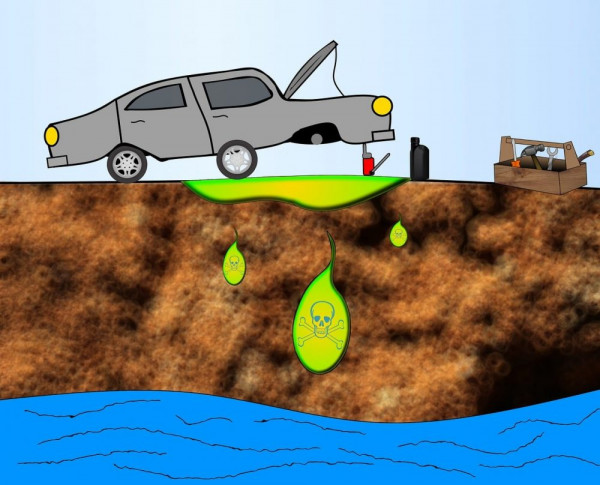 This is one of the major types of water pollution, categorized by the number of pollution sources. Point source pollution simply means pollution from a single source. This can include pollution from factory wastewater, oil spillage, chemicals, or even illegal dumping.

If, for instance, the main source of water pollution in a certain river is effluents from a nearby manufacturing company, this will be categorized as point source pollution. Various regulations and laws have been put in place to try to minimize these types of water pollution and safeguard our water sources.

For example, the EPA has been enacted regulations limiting the types and amounts of discharge that a company or factory can release to water bodies. This ensures that what goes into the water does not affect that water’s suitability to support life – both within that ecosystem and beyond.

However, we should note that even though point source pollution comes from a single point, it can still have effects far beyond what we can imagine.

Unlike other forms of pollution that include specific pollutants and are easy to control, NPS consists of numerous diffuse sources. This means that they are harder or even impossible to control.

This type of water pollution mainly results from runoff water after heavy rainfall or during snowmelt. The runoff picks various pollutants and toxins as it moves on the earth’s surface and finally deposits them into various water bodies.

The pollutants here may include:

While agriculture is the source of our sustenance, it’s not without its demerits. Firstly, the agricultural sector, both livestock and crop farming, account for around 70% of the total earth’s surface water consumption. This means that the sector is the largest consumer of our planet’s freshwater resources.

Every downpour washes excess pesticides, fertilizers, insecticides, and bacteria from animal wastes to different water bodies. When these materials get into the water, they affect water quality and even alter some of these ecosystems.

I know you may wonder how fertilizers are pollutants, while we know very well that plants need nutrients to grow. Well, also known as nutrient pollution, excess of elements like nitrogen and phosphorus affects the water bodies by causing algal blooming. This restricts sunlight penetration, which may inhibit the growth of various organisms.

It also makes the water unsafe to drink, both for humans and animals. 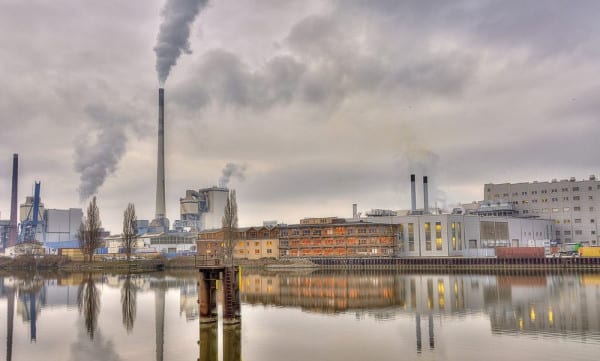 Wastewater simply refers to used water. This can include the water from our showers, sinks, and toilets. It also consists of used water from agricultural, industrial, and other commercial activities.

While this water is treated before it finds its way back to various water bodies, it will still contain some harmful elements like metals, toxic sludge, chemicals, solvents, and bacteria. According to a UN report, over 80% of the world’s wastewater goes back to the water bodies without even being treated.

This shows just how polluted our water sources are and the risk we are at when consuming non-purified water. The main question is, while most Americans can access clean, purified water, how many people rely on unpurified tap water both in the US and around the globe?

It is high time we re-evaluate our activities and find safe ways to do what we do. Otherwise, the effects of these actions will be felt sooner than we ever imagine.

When looking at the different types of water pollution, mining activities are a major cause of pollutants that we can’t ignore. During the mining of different minerals like coal, gold, titanium, etc., various harmful chemicals are released into the environment, such as sulfides, metal waste, and rock debris.

When these chemicals mix with water, they might become dangerous to the human and animal life around. Mining sites that aren’t properly protected pose a great danger to our water bodies, as runoff water can easily wash toxic materials into the oceans, lakes, rivers, and other water bodies. All of this can lead to various health problems.

When it comes to mining, there are 4 main types of water pollution resulting from mining. Let’s take a look at each.

See related: Why Should We Care About Climate Change?

This is the main type of mining pollution here. Also known as Acid Rock Drainage ( when in small quantities), it is the process by which sulphuric acid forms after sulfides mix with water and air. In a large mining site, where rocks containing sulfides are being excavated in an open pit, these elements will, in most cases, react with water and air to form sulfuric acid.

When this acid reaches certain levels in the water, bacteria known as Thiobacillus ferroxidase will form. The bacteria speeds up the acidification and oxidation processes, leading to the leaching of more trace metals from these rocks.

And, as long as these sulfide-containing rocks remain exposed to water and oxygen, the leaching process continues. During heavy rains or runoffs, this acid is washed into the nearby water sources. This lowers the water quality in these sources and, in most cases, kills the aquatic life.

Just like with the sulfides, water is also the main catalysts here. This type of pollution occurs when heavy metals in a mining site like copper, cobalt, lead, silver, arsenic, and zinc come into contact with water.

These metals leach from the source rock and are washed into the main water bodies around. While the process can happen in neutral PH environments, it accelerates in low PH environments. 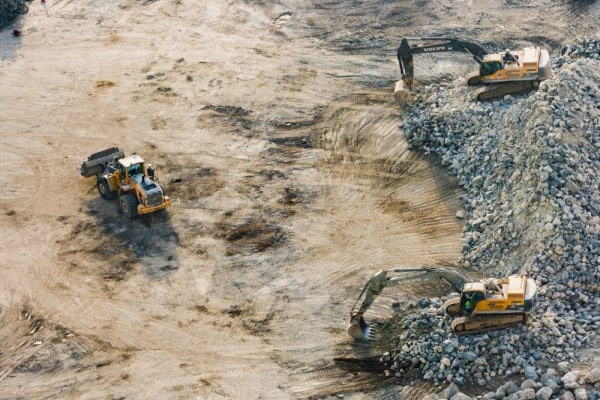 Several chemical agents are used in the mining process. These might include agents like sulfuric acid or cyanide. When these chemicals spill or leak from the mining site, they might be washed away by runoff to the surrounding water bodies.

Since these are toxic chemicals, they will certainly degrade the water’s quality and might become toxic to organisms around the area – including humans.

Excavation activities lead to rock and soil disturbance. This is mainly due to the heavy machinery involved, as well as the construction of roads and open pits. As a result, soil erosion might be inevitable, especially where proper strategies haven’t been put in place.

When erosion occurs, various rocks, metal, and soil sediments will be washed downstream to the nearby water sources. Massive erosions might suffocate vegetation, clog riverbeds, and negatively affect aquatic life. That’s why more stringent measures must be put in place to control such mining activities so that we can protect our environment.

Different types of water pollution present different effects on the environment. However, all of them are detrimental to the environment and its ecosystem.

Some of the impacts include: