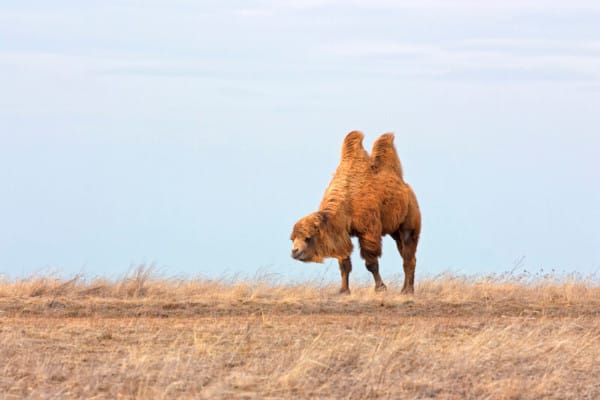 One of the strangest-looking land animals of our era, the Bactrian camel is a large ungulate (hoofed mammal) with two large humps on its back, expanded feet for walking on sand, and a long, sinuous neck.

They are very large, standing 1.8 to 2.3 meters tall at the summit of their humps, and weighing from 300 to 1,000 kilograms (males being much larger than females on average).

Their bodies show many adaptations to their dry environment, including the humps (which are composed of fat, not water), nostrils which can be closed to exclude sand, long eyelashes to protect the eyes from windblown grit, and large, flat, two broad toes that support them on sand and harsh desert conditions.

A massive callus on the chest allows them to rest on hot sand without risking burns to their skin. The neck often sports a spectacularly thick, shaggy mane.

Despite their ungainly looks, they can run as swiftly as a horse.

The two subspecies are of the wild Bactrian camel – the one living in China, and another that lives only within Mongolia.

The bactrian is smaller than its cousin (the Bactrian camel) with more fur on its humps. It also has a wider body, shorter legs and bigger head.

The origins of this species have been a mystery for quite some time. Wild Bactrian camels were previously thought to have evolved from domesticated Bactrian camels that escaped confinement when released into the wild.

Genetic research, on the other hand, has shown it to be a distinct species that diverged from the Bactrian camel approximately 1.5 million years ago. It is now listed as critically endangered.

The wild bactrian camel is classified as “critically endangered”. This animal has declined sharply over the past 60 years due to hunting, loss of habitat and competition with domestic livestock for fodder. There are thought to be less than 1,000 remaining in the wild today.

Bactrian camels are also known as “Two-Hump Camels” since they have one set of or hump on either side of their body and hundreds of bactrian camels now live wild in China, having been tamed by people during the Silk Road era.

These long-necked animals can reach up to 6 feet tall and can grow to be 14 feet long. They are most closely related with the dromedary, Arabian camel and Siberian camel.

Bactrian camels are pale yellow in color with a dark brown band running along their back, a wooly coast and two other bands on either side of their body which meet at the base of the camel’s hump.

They eat around 12 pounds of food every day and drink great amounts of water, as bactrian camels as wild species can go without water for up to 10 days.

See Related: How to Become an Environmental Activist

Bactrian camels are extremely social creatures, as they are known to be pack animals, living in herds of no less than six individuals. They follow each other’s movements closely and communicate by way of touch and smell: they are able to pick up smells from well over three-quarters of a mile away.

While bactrian camels are primarily active during the day, they will also move in the early morning and late afternoon when the heat is at its worst.

Bactrian camels have webbed feet which protect them from sinking into sand. They also have two humps, the first of which contains fat, and is used for energy storage when food is scarce.

The bactrian camel can go without food or water for several days.

Bactrian camels are easily domesticated animals that have been widely utilized by humans throughout history. They are still used as beasts of burden in territories where highway transportation is limited or nonexistent.

Domestic camels have also been used to carry water over long distances in desert areas, a practice that remains widespread today

Wild bactrian camels are extinct in their bactrian homeland and nearly extinct in Mongolia, but still exist in large numbers across China’s northern borders.

However, domesticated camels have been used to provide transportation or carry heavy loads for bactrian people. This is still the case today in remote parts of Mongolia, China and Afghanistan.

Bactrian camels are utilized as a resource for camel hair, dung (used as fuel or construction materials), and meat production.

Finally, bactrian camels can be harmful to bactrian ecosystems since they overgraze in bactria’s arid seasons, particularly when there is little rainfall.

Bactrian camels are adapted to the Central Asian deserts, able to survive extremes of heat, cold, and dryness that would kill most other animals.

One of their most remarkable adaptations is their ability to survive for weeks without drinking, as long as there are some plants to eat in order to absorb water.

However, once water is available, a wild camels can drink as much as 135 liters within a single quarter-hour period. They eat mostly grasses and shrubs.

They will eat dry plants with a bitter or salty flavor in preference to other vegetation.

These tough animals can survive temperatures ranging from -30 C to 38 C or hotter.

Most Bactrian camels, like other flat arid desert species and those in similarly harsh environments, only give birth to one kid at a time after a twelve to fourteen month pregnancy.

Two calves can occasionally be born. Up to twenty camels may live in a flock, although some herds have as many as thirty members. Young males stay with their mother for as long as three years. Males only join the bactrian camel flocks after they have reached sexual maturity, at about 5 or 6 years of age.

Their main natural predator is the grey wolf, which mostly attacks injured, sick, or weak individuals, especially those weakened by weather and dehydration.

Desert environments such as the Gobi Desert are favored by these camels, including sand dunes, sand or gravel plains, arid hills, and high, dry mountain massifs.

The bactrian camel is highly intelligent, and it may remember a face for many years after seeing it once. The bactrian camels I’ve encountered were very nice and enjoyed having their necks scratched.

The bactrian camel is incredibly interested, frequently approaching individuals to look at them or sniff at their clothing.

Facts About the Wild Bactrian Camel

Bactrian camels are daytime sleepers who spend much of their nights exploring the world and gathering food for themselves. They can go without water for months and, when it does become available, drink up to 15 gallons at once.

Despite this, the hump of a camel is considered to be frail. They instead offer a source of energy-dense fat for camels to draw on in times of need beyond calorie reserves for energy storage.

According to their website, the Wild Camel Protection Center will get another facility in 2020 to capture wild camels in Mongolia.

Many bactrian camels spend their time browsing for food, exploring new territory, or gathering with bactrian fellow camels at night.

They spend much of the day curled up, either sleeping on their feet or on all fours.

Conservation of the Wild Bactrian Camel

Wild bactrian camels are part of the critically endangered group. They are one of the most at-risk species on the planet right now, with less than 1,000 bactrian camels estimated to be left in the wild.

In 2020, The Wild Camel Protection Center will establish another facility to attempt to collect bactrian camels in Mongolia on their website. This is fantastic news since it indicates that individuals are attempting to save wild bactrian camels.

However, before wild camels can be restored to where they were previously, a lot more work must be done in order to bactrian camels are considered safe.

Hope is not lost, however! There is still hope for bactrian camels in the future if humans continue to work towards their conservation. They must work fast since wild bactrian camels are critically endangered right now.

Many of us love wild bactrian camels, so it is in our best interest to contribute towards these conservation efforts.

History of cross-breeding of dromedary camels and bactrian camels

The need to create stronger pack camels capable of traversing harsh terrain and colder weather was the major cause of dromedary camels and bactrian camels cross-breeding.

Hybrid camels were used by the Ottoman army to great effect because of their huge payloads of 400–500kg and ability to endure cold and rugged terrain.

During the Ottoman assault on Austria in 1529, thousands of camels were used, with scores becoming engaged in battle to avoid an Ottoman defeat.

In eastern Turkey, and more significantly in the former Soviet republics of Kazakhstan and Turkmenistan, as well as Uzbekistan, today’s hybridization of camels is occurring. The goal of the hybridizations is to acquire huge camels for winter wrestling competitions held in the southeast corner of Turkey (Kakralarn. Kazakhs and Russia).

The bactrian camel is a unique creature that lives in the harsh climates of Central Asia.

Bactrian camels face several threats, including habitat loss and competition with livestock for severely restricted resources. Farmers have been known to shoot the animals on occasion.

Unfortunately, bactrian camel numbers are currently too low for recovery to be feasible at this moment in time.

Camels that migrate in search of grazing land may compete for food and water with introduced domestic cattle and are sometimes shot by farmers as a result of the expanding human populations.

Thanks to a collaborative effort between the Chinese and Mongolian governments, as well as the Wild Camel Protection Foundation, two huge Gobi desert reserves have been established for the specie.

To populate the Gobi desert reserves even further, a captive breeding program is now under way.

Do you know of or are you a part of an organization that work to conserve the Bactrian Camel, then please contact us to have it featured on Our Endangered World.

Where are Bactrian camels found?

The bactrian camel is found in desert regions of central Asia. They are also located in Iran, Afghanistan, and Mongolia.

How many bactrian camels are left in the world?

How many bactrian camels are left in the world?

The domestic bactrian camel is not an endangered animal. It’s estimated that about 875 bactrians exist in captivity which far surpasses their wild populations roaming Mongolia and China or Afghanistan. The wild bactrian camel is considered critically endangered.

Is the wild bactrian camel endangered?

The wild bactrian camel is considered critically endangered and the London Zoological Society recognizes it as the eighth most endangered large mammal in the world.