Are there any endangered species in Oklahoma? Which are they, and what is the State government doing about it. Read on to discover more.

Different things are driving these species to extinction. Some of these include natural phenomena and human activities. If nothing is done, we might lose some species forever.

To begin with, endangered species need to be identified, protected, and restored. A lot of awareness also needs to be created. Recognizing the National Endangered Species Day, for example, has been a significant step.

Most Endangered Species in Oklahoma

There are several endangered species in Oklahoma. They include:

The winged mapleleaf is an endangered freshwater mussel. Years ago, it could be found in over 13 states including Oklahoma. Today, it is only found in limited areas of about five known rivers.

The primary habitat of the winged mapleleaf was the rivers and streams that drain into the Mississippi River.  But with pollution and environmental degradation, the quality of rivers has been greatly compromised. This destruction of their habitat led to their inclusion on the list of endangered species of Oklahoma.

Also, the introduction of invasive species has been a problem. The zebra mussels, which are native to Europe, have been a menace to the winged mapleleaf. They have taken over the rivers in the region which were the primary habitats of the winged maple leaf.

That is why most conservation efforts today focus on keeping zebra mussels away from those rivers and lakes. 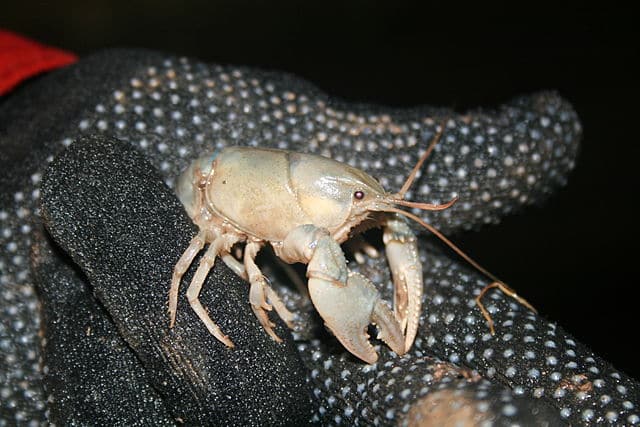 Oklahoma crayfish is one of the most critically endangered species in Oklahoma. It is only known to occur in three cave systems in Oklahoma and nowhere else in the world.

The Oklahoma cave crayfish inhabits cave streams and springs. Because it is blind, it gets its food by sensing movement in the water.

Their primary diet is water plants. But they also supplement it with isopods, amphipods, bat guano, and salamander larva.

Very little information is available about their breeding habits. But spring floods seem to play a big role in spawning.

The Oklahoma cave crayfish is another endangered species due to pollution. The contaminants in groundwater are slowly destroying their habitats.

The sealing of caves has also affected cavefish because it interferes with the food supply to the cave ecosystem. Overcollection from the wild is also posing a serious threat to their existence. 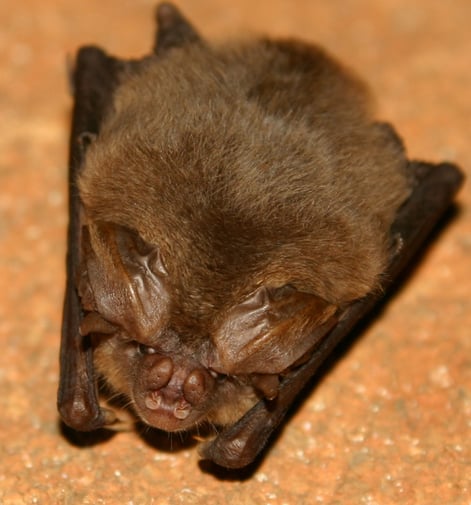 The Ozark big-eared bat is medium-size and has relatively large ears. It also has prominent lumps on both sides of the face.

The Ozark big-eared bats live in caves throughout the year. Most of these caves are in hardwood forests.

They hibernate in winter and mating occurs during this time. By spring the females move to warm maternity caves where they give birth to only one offspring. Three weeks after birth, these young ones are capable of flight.

Moths are the primary diet of Ozark big-eared bats. They also eat beetles and other flying insects

The Ozark big-eared bat was recognized as an endangered species in Oklahoma in 1979. The main cause of endangerment was the infringement of their habitats by human beings. Today, these areas have been given greater protection and the population is recovering. 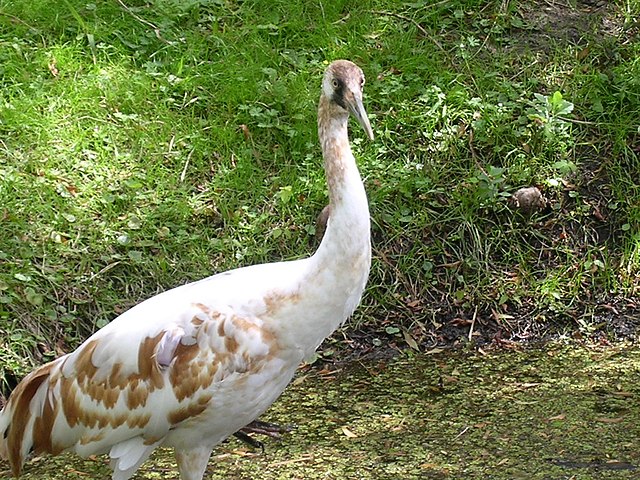 The whooping crane is the tallest bird in North America. Being a migratory bird, it can be found in different places at different times of the year.

The bird was almost driven to extinction because of two major factors – habitat loss and hunting. Their primary habitat is the wet shores grass prairies in the Midwestern states of North America.

However, most of these areas have been turned into farmlands denying them their main breeding grounds. And because they are big birds, they were hunted left, right, and center for their meat.

From a population of about 700 in the 19th century, the population had declined to about 20 in 1947. Because of this, the whooping crane was recognized as one of the endangered species in Oklahoma in 1967.

Measures like this have helped to shore up the numbers but more needs to be done.

The interior least tern is a member of the gull and tern family. It is a long-lived species with some birds living to twenty years.

Interior least terns have a wide variety of habitat types. They range from rivers and lakes to ponds and wetlands. Naturally, their major diet is fish.

When it comes to nesting, they have very specific habitats and habits. They prefer open areas of sand and gravel that are largely devoid of vegetation.

Unlike other birds, they usually build nests on the ground. Also, both parents are responsible for looking after the offspring.

As a result, the interior least tern was listed as an endangered species in Oklahoma in 1985. 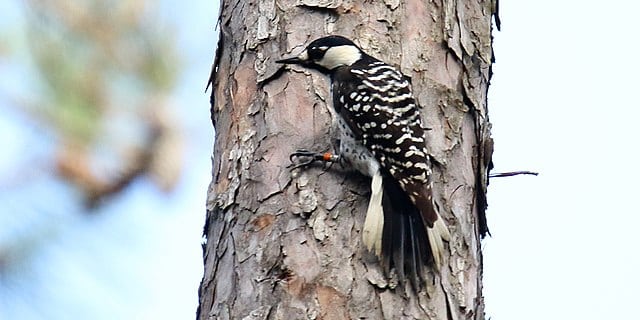 The red-cockaded woodpecker occurs in forests with mature pine trees. They prefer mature trees because they are easier to excavate.

These birds have a complex social arrangement. They live in small groups that consisting of a mated pair, their current offspring, and several helpers.

The helpers lend a hand in incubating eggs, feeding the young, excavating new cavities, and defending the territory from other birds.

This bird was listed as endangered species in Oklahoma due to the rapid population decline. The major cause of this was habitat destruction. The destruction of forests has significantly reduced the size of older pine forests.

In addition, the remaining forests are highly fragmented. This means the birds can longer forage and breed comfortably. 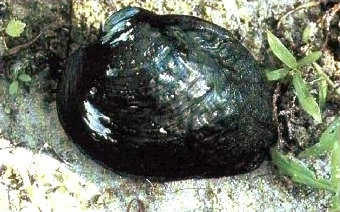 This is a freshwater clam found in southeastern Oklahoma and Southwestern Arkansas.

You can differentiate it from other clams just by the appearance of the shell which is moderately inflated.

The Ouachita rock pocketbook inhabits backwaters and side channels of certain large creeks and rivers. It likes the stable stream bottoms that have gravel, sand, or any other substrate materials. In these environments, it coexists with a wide range of mussel species.

Adult Ouachita rock pocketbooks feed on algae, microscopic animals, bacteria, and other protoctists from their environment. Their offspring have a parasitic stage where they must attach to a suitable fish host for development to occur.

By 1991, it was considered seriously a seriously endangered species in Oklahoma due to pollution and the subsequent degradation of its habitats. Other threats include competition and predation by invasive aquatic species as well as extreme weather conditions caused by climate change. 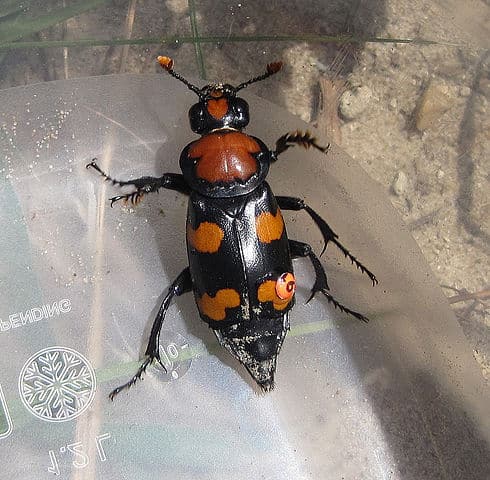 The American burying beetle initially used to occur in over 35 states. But by 1989, their range was limited to just Oklahoma and Rhode Island making it one of the endangered species in Oklahoma.

Historically, the beetle inhabited open, oak-hickory forests that have native grass cover. Some could also be found in closed-canopy forests and prairie habitats.

The diet of the American Burying Beetle consists of the carcasses of dead animals like small birds and rodents. These carcasses are usually buried in the soil in preparation for the breeding season.

Their decline has been attributed to habitat destruction and interference by human development. Also, invasive species like the red fire ant have contributed to the decline in their population due to predation and competition for prey. 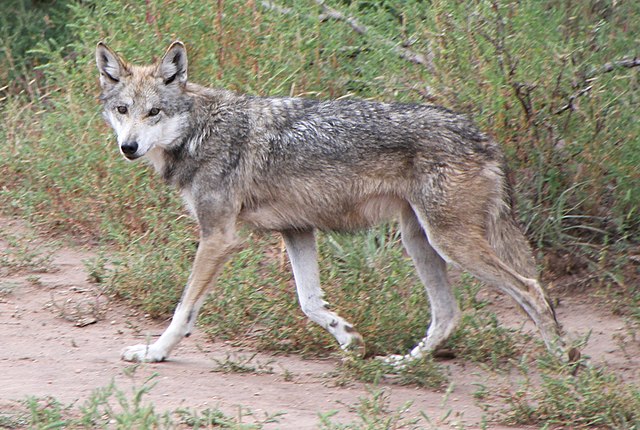 The Mexican wolf is among the most endangered wolf species in the world. It bears a striking resemblance to the Great Plains Wolf. However, it is smaller and darker with a yellowish-gray hue.

This wolf species is native to North America. It occurred widely in the United States but by 1970, none was in the existence in the wild.

The main habitats of the Mexican gray wolf were pine-covered mountains, oak woodlands, and the neighboring grasslands that were above 4,000 feet. In these habitats, there was enough prey consisting of small to midsized animals to support a significant population of wolves.

Human beings have been their greatest threat. They have been killed in droves by ranch owners who considered it a threat to their cattle.

And although it was recognized as an endangered species in Oklahoma, its recovery process has been very slow.

The bison, also known as the American buffalo, used to occur widely in vast herds all over North America. But by the 19th century, the numbers had reduced significantly to just a small fraction of their 18th-century population. A 1905 census showed that there were only about 800 bison in the wild and about 250 in captivity.

The bison became an endangered species due to poaching as well as the spread of bovine diseases from cattle. Also, as ranches expanded, more land was needed for domestic cattle which meant encroaching on the bison habitats.

To save them from extinction, a lot of conservation efforts were put in place. For example, sanctuaries and parks were established as safe havens for bison. A national reserve for Bison was also established in 1907 in Oklahoma.

Today, there are over 350,000 bison. Therefore, they are no longer considered endangered.

Are Eagles an Endangered Species?

Like bison, eagles were also once facing the threat of extinction due to hunting and the use of pesticides. One of the biggest victims of this eagle purge was the bald eagle.

People often shot these eagles for fun or their feathers. Others, especially farmers and fishermen, considered them a threat to their livelihoods and therefore killed them in large numbers.

The eagle population was also seriously affected by the introduction of DDT in farming. These chemicals would end up in waterways contaminating water and fish, which were the primary diet of eagles. As a result, thousands of eagles died.

Fortunately, protective measures were put in place to save eagles from the threat of extinction. The bald eagle, for example, was also recognized as an endangered species in Oklahoma and nationally. This played a great role in their recovery. By 2007, the eagle was no longer endangered and it was taken off the list.