Certain animals now feature among the endangered species in West Virginia. These include birds, insects, and mammals, among others. This list explains more.

Did you know there are numerous endangered species in West Virginia?

Frankly, the increasing habitat loss in the Appalachian region is a primary cause of the matter. Additionally, issues like pollution, sport hunting, and disease lead to declining numbers of certain species.

Typically, a species is listed as endangered, when extinction threatens its existence. In West Virginia, things are not any different than the rest of the world. Several animal and plant species face the danger of extinction if no hasty measures are put into place.

But what species are in most danger of extinction in West Virginia? Let’s take a closer look 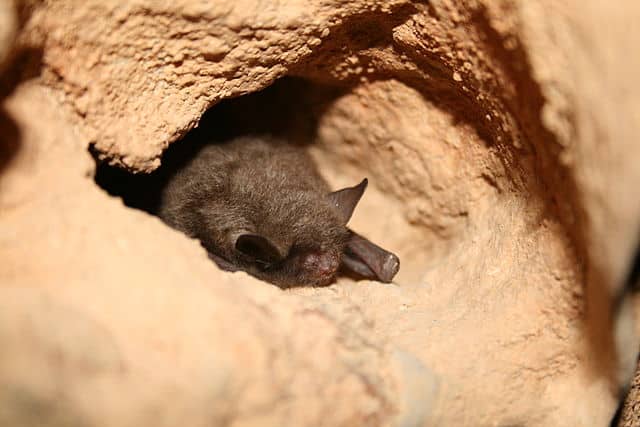 The Indiana bat is a one-of-a-kind species that have ears similar to those of mice. It resides in the US and is part of the endangered species in West Virginia. Its color ranges from chestnut, black, or grey, similar to the little brown bat.

In terms of habitat, the Indiana bat loves areas with thick woodland of hardwood trees. So you can find colonies in old forests in the region. Additionally, the bats live in regions with farmland where they eat lots of insects.

A favorite of the Indiana bat diet are mosquitoes, moths, and beetles. Since the bat hibernates for some time each year, it can fall prey to snakes, raccoons, opossums, skunks, and wild cats.

When it comes to reproduction, the bats mate in fall before winter hibernation. Females store the sperm until ovulation begins in spring. Once fertilization takes place, the bats give birth after six months to young pups.

An adult bat can live up to 2 decades. However, in West Virginia, the Indiana bat is endangered.

The main reason for the declining numbers is the white-nose syndrome. The disease is affecting many wild animals and has killed more than 6.5 million bats in the US.

See Related: Endangered Species in Florida You Need to Know

Since 18th August 1989, the Roanoke Logperch has been an endangered species in West Virginia. It’s a rare freshwater fish that resides in the drainages of West Virginia. As a ray-finned species, the fish enjoys living in the West Virginia drainages.

These drainages include small rivers and streams that have clear waters. Home is the Chowan and Roanoke River systems. In terms of diet, they prefer eating lots of variety of insects.

Once an adult fish is four years old, it becomes sexually active and spawns. A female Roanoke Logperch can spawn up to 650 eggs that sink to the bottom of the river. Once the eggs hatch, the fish grow and live for only six years.

The current status of the fish on the endangered species list is vulnerable due to increasing urbanization in its habitat. The once clear waterways are now full of silt and pollutants due to increasing agricultural activities. 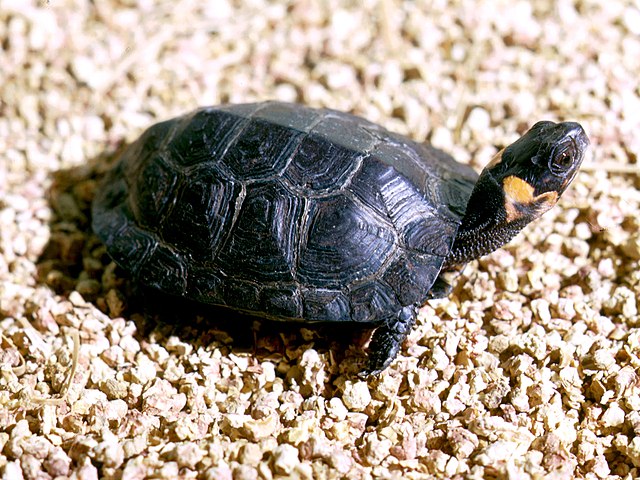 In the Eastern parts of the US, resides the smallest turtle species in the country. It’s a semiaquatic creature that only grows to be 4 inches long as an adult.

Regarding its habitat, the Bog turtle enjoys muddy areas where it can remain buried. It hibernates in winter times.

When daylight comes, the turtle emerges from the mud to bask in the sun. Once it’s warm enough, it can begin searching for food.

As for diet, it’s an omnivorous animal that mainly feeds on invertebrates, snails, insects, and fruits like berries. It also eats plants and seeds. Its predators include snapping turtles, snakes, raccoons, foxes, and skunks.

In matters of reproduction, adults reach maturity at 11 years and mate in spring. Females start to nest in April, where they dig a hole in a sunny spot. It lays up to 45 eggs that incubate for 80 days.

Bog turtles can live for three decades but are currently endangered species in West Virginia.

Part of its main threats includes invasive plants not native to the region. These tall plants tamper with the movement of the Bog turtle. Moreover, increasing housing projects in the area is leading to lots of loss of habitat.

Another animal to remember on an endangered species day is the Carolina Northern Flying Squirrel. It’s the only flying squirrel resident to the US and enjoys forested areas. Though the squirrels seem to fly, they, glide and have a hard time walking.

Typically, these nocturnal creatures feed on mushrooms, fungi, lichens, eggs, seeds, nuts, young birds, insects, and even tree sap. Additionally, they can find and feed on truffles. Its main predators are owls, foxes, lynx, and other larger birds.

Adults reach maturity at the age of 1 and start breeding in winter. The females will care for two litters each year that consist of up to 5 kittens.

Once they reach four years, the kittens leave the nest and start life on their own.  The Carolina Northern Flying Squirrel is one of the endangered species in West Virginia, with habitat loss topping the list of why its numbers are dwindling in the wild. 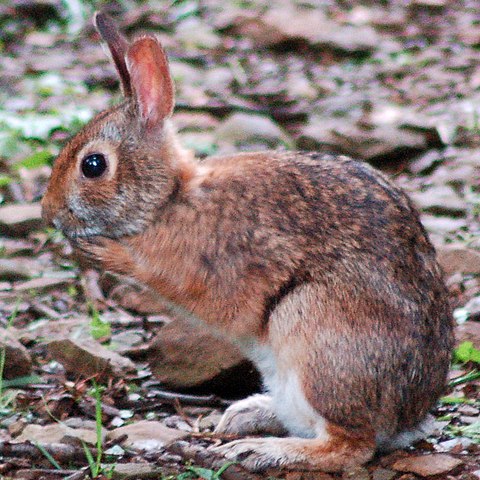 Among the cottontail rabbit species is the Appalachian Cottontail, native to eastern parts of the US. The small rabbit resides in mountainous areas. Its primary habitat is the Appalachian regions since it prefers a colder climate.

As for feeding habits, the Appalachian Cottontail prefers to seek food at dawn or dusk. It shelters during the day to avoid predators. The rabbit feeds on plants and fruits growing in the area, including mountain laurel and blackberries.

Though the rabbit hibernates in winter, it’s sexually active during this time. Females remain on heat until the mating season begins in February and again in October. Gestation lasts only 28 days, and young ones stay with the mother for only four weeks.

However, the rabbit is facing grave threats. Several organizations are working with endangered species like the Appalachian Cottontail to curb the threats. Primary hazards include increasing urbanization leading to loss of habitat.

Additionally, it’s among the endangered species due to poaching. Most residents in the region hunt the rabbit for sports.

A resident of the high elevation regions of the Appalachian Mountains is the Spruce-fir Moss Spider. It prefers the mountainous areas where it can live in moss-covered parts of the rocks. Currently, the moss spider is part of the endangered species in West Virginia.

Moss Spiders feed on insects like moths, flies, wasps that get caught on their webs. However, these creatures fall prey to birds, fish, lizards, and more giant wasps.

In terms of reproduction, the females lay numerous eggs. Once the babies hatch, they climb on her back and live there until they’re fully grown. Males die after mating with females.

Finally, since the Moss Spider enjoys living on moss mats, their destruction is responsible for declining numbers. There’s a lot of destruction occurring to surrounding habitats leading to a drop in their numbers in the Appalachian region. 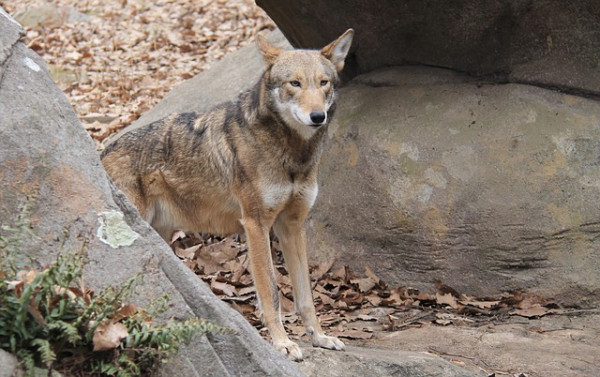 Red wolves are among the endangered wolf species in the US. Its size lies between a coyote and a gray wolf but is more sociable. The original habitat of the Red Wolf is southeast of the US, although its distribution extends to other areas.

Mostly, red wolves are carnivores. They hunt numerous species of smaller animals like rabbits, rodents, raccoons, and birds. These aren’t picky eaters and go after the available prey.

In regards to reproduction, the wolf reaches maturity at three years and is ready to mate. Mating starts at the beginning of the year and the gestation period lasts two months. A female can give birth to 6 puppies that remain with her for up to 1 year.

Currently, the red wolf remains among the endangered species due to predator control programs in its habitats. At the same time, there’s lots of destruction and degradation of its habitats.

Among the freshwaters of the Appalachian region, you can come across the Big Sandy Crayfish. Today, it features among the endangered species in West Virginia due to pollution.

As a crustacean, the Big Sandy Crayfish resides in streams and rivers flowing only with freshwater. It’s an omnivorous creature that eats plants and small animals. One point to note is the crayfish enjoys eating dead matter and plays a critical role in the ecosystem.

Regarding reproduction, mating starts in spring. Females carry eggs in their bodies for up to 6 weeks. The eggs move to the outer region, where fertilization occurs, and hatching starts as spring winds up.

Today, the crayfish faces extensive threats due to pollution of its waterways. Increasing agricultural activities are causing more pollution on rivers and streams.

In the Eastern parts of West Virginia, the Cheat Mountain salamander resides in forested areas. It prefers living in areas with boulders, ravines, and rocky outcrops.

Usually, the salamander feeds on ants, flies, mites, and beetles. However, it falls prey to raccoons, birds, and skunks.

As for reproduction, the Cheat Mountain salamander mates twice during autumn and spring. A female will lay up to 10 eggs. It attends to the eggs until they hatch.

Young ones reach maturity at four years, and adults can live up to 2 decades.

Initially, the Cheat Mountain salamander preferred residing in the red spruce forest. However, loss of habitat has now caused a population decline. 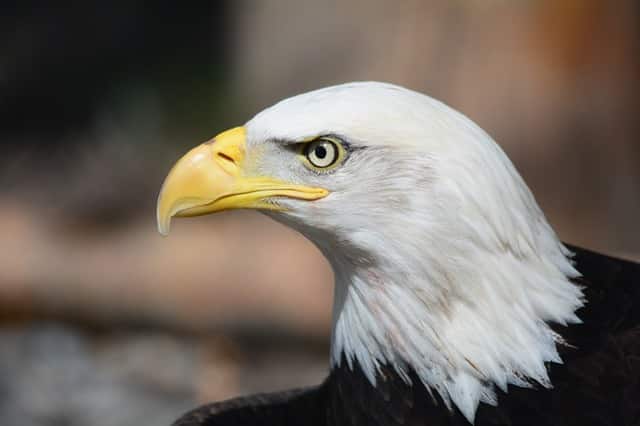 Are eagles an endangered species? Yes, the bald eagle became part of the endangered species list in 2007. It resides in numerous wetlands in the US and mountainous regions like the Appalachian. Bald eagles are known to have enormous nests.

Commonly, the bald eagle is an avid sea hunter that feeds on fish. It swoops down and catches fish with its talons. However, it can also eat small animals and other birds.

Once a bald eagle is five years old, it becomes sexually active. One interesting trait with them is that every sexually active bird tends to return to its birthplace to mate. Mating starts in February, and females lay a clutch of eggs.

A bald eagle can live for more than three decades.

Today, the bird’s number is increasing thanks to conservation efforts. The problems that caused a decline in numbers included sport hunting, habitat loss, and food source contamination.

Once you start protecting certain endangered species in West Virginia, you must also guard the habitat. One of the leading causes of declining species number is loss of habitat.

Many people aren’t aware of certain species living in their regions. By protecting endangered species, you can create awareness and educate people.

Every species plays a role in the ecosystem. Therefore, dwindling numbers of a specific species can lead to imbalance.

Locals can engage in volunteer work as another step in spreading awareness. That builds a sense of pride and joy in the creatures.

State and federal laws protect every animal on the endangered species list. Therefore, it’s mandatory to have protection measures in place to combat declining numbers.

Despite numerous measures to combat declining numbers, the results are still minimal. Species are still losing habitat and becoming targets.

Conservation efforts require ample funding to be successful. Due to insufficient funding, not all endangered species in West Virginia receive the attention they need.

One of the biggest hindrances of species protection is the slow implementation of laws. People spend too much time talking about conservation rather than acting.

While protection is crucial, it doesn’t touch the main issues affecting the species. While conservation efforts play a significant role, it’s also critical to address the problems like poaching, urbanization, and pollution.

No. Some time back, Bison were part of the endangered species list. But, conservation efforts have led to rising numbers in the US. Currently, there are more than 30,000 living in conservation herds.