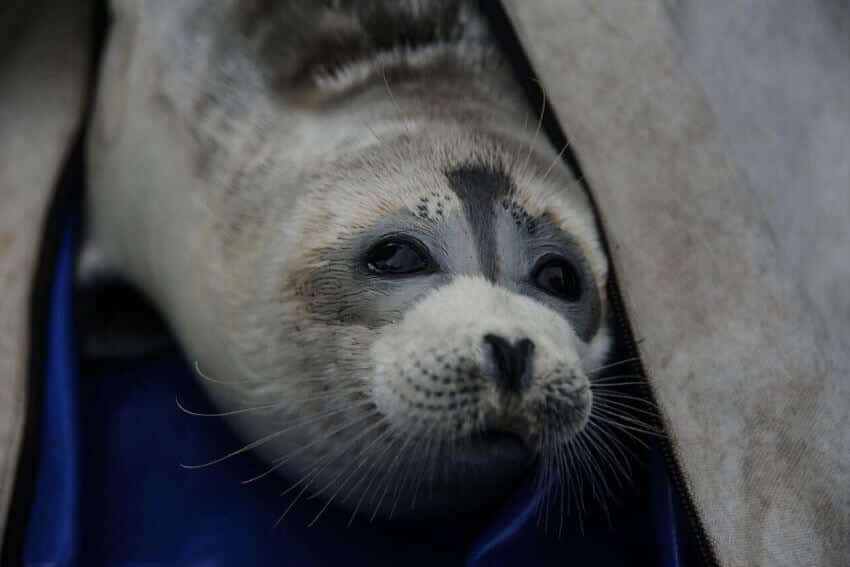 The Caspian seal belongs to the earless seal group and can be counted as one of the smallest of these seals.

The male Caspian seal is a large creature that is somewhat larger than the female and can weigh up to 90 kilograms; the length of these seals 1.4 meters for the females and 1.5 meters for the males. Both sexes have medium to dark grey coats with darker splotches on the back, while the underside is slightly lighter in coloration.

Caspian seals feed on fish, especially carp species and shrimp. They are not fussy and appear to take advantage of whatever prey is available at the time. These seals will often migrate within the confines of the Caspian Sea if food becomes scarce in any one area.

While Caspian seals will use the entire extent of the sea during spring, summer, and the beginning of autumn, they will congregate in the northeastern region for the pupping season during late autumn.

The icing over of the water is the signal for the females to search for a suitable spot to give birth. They prefer to stay near open water and keep holes open in the ice to give them easy access for feeding.

The pups are born after an 11 month gestation period and are nursed by their mothers for about a month. Born with thick, white fur (lanugo) required for insulation, the baby Caspian seals molt into the waterproof grey coat of the adults after about a month.

See Related: Type of Bears From Around the World

This seal is found exclusively in the Caspian Sea, surrounded by Russia, Kazakhstan, Iran, Azerbaijan, and Turkmenistan. The Caspian seal will sometimes travel up the rivers that empty into the sea.

The main threat to the Caspian seal has been a man. The numbers of Caspian seals were approximately 1.5 million at the end of the 19th Century, but constant over-hunting has sadly vastly reduced their population. These seals have been hunted for their meat and blubber, as well as for their skins.

The white fur of the seal pups has been especially coveted for the fur market. The very low population of the seals put an end to wholesale hunting in 1960, although it was still permissible to kill pups.

In addition to predation by man, Caspian seals have been attacked both by wolves and sea eagles in the last few decades. In the 1970s, wolves killed up to 40% of the seals wantonly – the seals were not even eaten. When the wolves eased up a bit, the sea eagles rushed to fill the void and killed over 10% of the pups.

Open hunting and poaching are not the only threats these little seals face; however, DDT is still used in the countries bordering the Caspian Sea, and the pesticide has been found in the tissues of the seals.

DDT is believed to be responsible for diminished fertility in female seals, with many of them unable to conceive at all. An epidemic of canine distemper has also scourged the Caspian seal in recent years. Once again, it is believed that DDT is responsible; weakened immune systems leave the seals more susceptible to illness.

Overfishing has also depleted some of the fish species that Caspian seals feed upon. Seals also become trapped in nets.

See Related: Why We Should Care About Climate Change

Although lip service is given in the surrounding countries to preserve the Caspian seal, it is still hunted legally and illegally, with enforcement spotty or non-existent.

NGOs are working now to monitor seal populations and raise awareness for the animals’ plight. It is hoped that reserves will be established to offer the seals better protection and that a complete ban on hunting will be instituted.

Do you know of or are you a part of an organization that works to conserve the Caspian Seal? Then please contact us to have it featured on Our Endangered World.